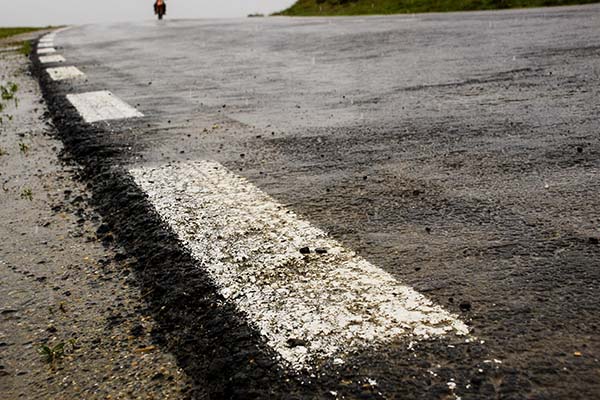 We recently wrote a blog about riding in wet weather, in which one of the tips given was about avoiding road markings as they can be slippery when wet.

Then, some clever bloke in the office asked why that was?

So, we found out and we're going to share that knowledge with you so you can look cool at parties.

So, what are road markings?

Wrong. It's actually a substance known as Thermoplastic Road Marking (TRM for short). Developed in the 1940s, TRMs were designed to help motorists during blackouts to navigate darkened roads while the war was on. They were so successful that 95% of road markings in everyday use are now made from TRM.

TRMs achieve this through something called retro-reflectivity – which is the ability of something to reflect light back to its source. Road markings achieve this through an innovation, first thought of by the Minnesota Mining and Manufacturing Company (or 3M as they are now known), who took glass beads normally applied to cinema screens and scattered them across wet road paint. This simple method of making a substance reflective survives to this day.

While the advantages of reflective road markings are obvious – being able to see something more easily is always a win, but motorcyclists have always had an aversion to them - why?

Well the simple answer is slippage. In the dry, the white lines have approximately the same grip (or skid resistance, as this is what is specifically measured), as the rest of the road's surface, so the grip is relatively consistent across the whole road, depending on the surface wear and type of material used.

So far so good.

Unfortunately, wet glass beads and motorbike tyres are not the best of friends. Asphalt's rough surface and better draining than glass-beaded TRM means that white lines are indeed more slippery in the wet than the general road surface.

Modern TRM includes rough aggregates to balance the glass beads' lower friction, but ultimately the more beads in the paint, the lower the skid resistance. For safety reasons, road-builders will tend to use more reflective beads on road sections which are considered dangerous, a move which, ironically, makes those sections more treacherous in the wet for motorcyclists at least.

As a biker you should always remember that reflectivity comes at the price of grip, so just be sensible and don't brake hard or corner on the white lines.