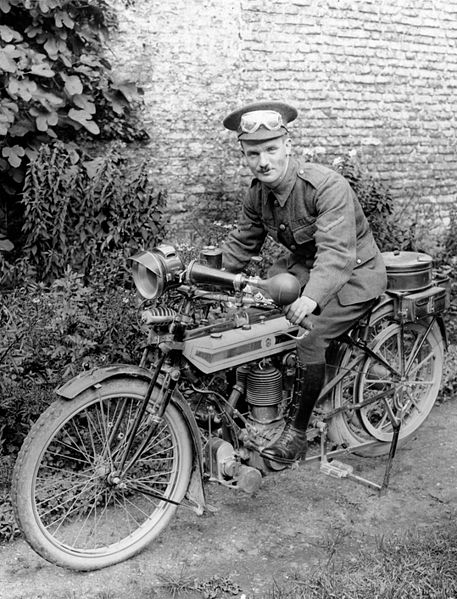 British dispatch rider in France on a
'Trusty Triumph'

This week sees the 100th anniversary of the end of the First World War. The sacrifices made in the name of freedom and democracy will be remembered across the world on the 11th November. So, for this week’s blog we take a look back at the role motorcycles played in the conflict.

For centuries, despatch riders had carried messages by horse, and towards the end of the 19th century occasionally by bicycle, but the growing popularity of the combustion engine was about to change the face of warfare forever.

At the start of the war the British government put out a call for motorcyclists to volunteer as despatch riders. The response was massive – every regional centre had more applicants than places, so the preference was for 500cc single cylinder machines, and the horizontally opposed double cylinder. Enlistment was for one year or as long as the war might last, and volunteers were paid £10 on enlistment, 35s per week and £5 to be paid on discharge.

Initially it was the British Army Royal Engineers Signal Service who began to utilise motorbikes, but they were quickly followed by the RAF (or Royal Flying Corps (RFC) as they were known at this time), and even the Royal Navy.

Due to issues that the wide variety of machines caused, particularly with regard to maintenance and parts, the forces progressively replaced the vehicles used with a limited range of models specifically designed and produced for the military. The RFC exclusively used P&M (Phelon & Moore) motorbikes during the First World War, while the MOD made a deal with Douglas Motorcycles to produce 300 bikes a month for the duration of the war. By the end of hostilities, Douglas had supplied over 70,000 motorcycles for military use.

Triumph also did their part, producing around 30,000 Model H roadsters to the Allies – around 20,000 of which went to British troops. The side–valve, four–stroke, 550cc engine machine quickly became a favourite of the UK military, mainly due to its reliability which led to the nickname “Trusty Triumph”. Interestingly, at the time Triumph had only two factories – one in Coventry, and the other in Nuremburg, Germany!

Although starting as transport for despatch riders, motorbikes quickly became used for a variety of functions. With the addition of a sidecar, motorcycles could be used as mobile machine gun mounts, ammunition carriers, casualty evacuation and even as carrier pigeon coops.

When used as a machine gun mount, the gun would almost always be used when the bike was parked – even being unloaded and set up on a tripod for increased stability. Due to the lack of even rudimentary suspension, the uneven ground and the unpredictable nature of the motorcycles themselves, the machine gun would never be used while the bike was in motion, as it would be impossible to aim or fire accurately.

Towards the end of the war as mechanised warfare began to have a greater impact, and trench warfare evolved into something much more fluid, the motorcycle became even more important as a means of communication. It’s likely that it was a motorcycle despatch rider that rode 12 miles behind the German front line, through a shattered German Army, to tell the armoured cars of the British Tank Corps that the war was over.

On this, the 100th anniversary of the end of the Great War, we should remember all those who fought to defend the freedom of our nation, many of whom lost their lives in the process, and those who continue to fight for us.

To donate to the British Legion, visit their site by clicking here.