AX Arenacross is an annual series of UK arena events which took place through January and February 2018.

Last weekend, Wembley hosted the finale of the 2018 Power Maxed Arenacross Tour and for the third year running the champion was decided in the very last race!

Three-time champion Thomas Ramette took a slender lead into the Saturday night at Wembley by two points over fellow Frenchman Cedric Soubeyras. The excitement was ramped up, as fate led to both riders landing in the same side of the draw for the main event, setting up the mouth-watering prospect of meeting each other in every one of their heats during the evening, as well as the all-important hot lap. Ramette had the better of the early exchanges, finishing second in their first heat with Soubeyras close behind in third, extending the very slender lead Ramette had to 4 points. Cedric Soubeyras responded in fine style with a start to finish win, taking the maximum 20 points in the second bout between the flying Frenchmen. Champion Ramette kept his overall advantage, finishing a mere 2 seconds behind Soubeyras, taking 18 points and a 2-point championship advantage into the hot lap. 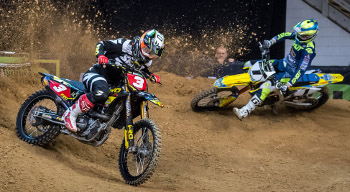 Producing arguably the turning point of the championship, the hot lap had Ramette finishing 4th, the quick-Aussie Reardon 3rd, Soubeyras 2nd with Le Francois a surprise winner with a faultless ride. This ultimately swung the pendulum for Soubeyras as his 4 points to Ramette's no score, meant it was now the challenger's turn to lead the championship by 2 points heading into the final, and unbelievably a third consecutive last heat championship decider between the two.

Reardon got away quick in the final, and with his unique style of taking on four jumps in one down the back straight (no other rider was doing this), he built an unsurmountable lead. Ramette was trouble free in second and Soubeyras eventually battled through into third after initially getting swallowed up by the pack in the early stages. The drama of previous years threatened to explode but due to the double-point scoring system in the final, Soubeyras only ever needed to be one position behind Ramette. With Reardon clearly the fastest man on the track, Ramette was never likely to set up a final showdown and the three men crossed the line spaced equally apart.

Although the fans never got the climactic drama of previous years, it took nothing away from the sheer delight of seeing Soubeyras finally take the crown away from Ramette. Three years of hurt for Soubeyras was finally put to bed as he took the top step at Wembley to round off a truly incredible AX Arenacross tour.

So, to next year. Will Ramette reclaim his crown or will Soubeyras assert his authority? One thing is for sure … you don't want to miss it!