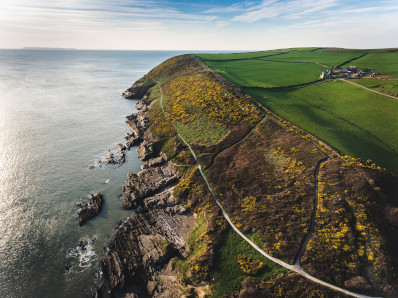 The four corners of the UK offer some of the best UK motorcycle riding routes in the world. The diverse and picturesque landscape, together with technically challenging roads, all add up to bend swinging heaven.

I've been lucky enough to ride across some of the best motorcycle routes in Europe and beyond. Ignoring the amazing roads on our doorstep, though, is a crime. With hundreds to choose from, here are 4 of the Best UK Motorcycle Riding Routes.

Each route is perfect for either a daylong blast or a full blown road trip, so saddle up and I'll see you on the road.

The southwest tip of England is home to both stunning scenery and a great combination of coastline, hills and forested roads. Taking the A39 west from Glastonbury takes you on a ride through the sweeping Quantock hills and beautiful Exmoor National Park.

Continue 20 miles southwest, cross the border into Cornwall and the A392/A3075/A30 follows the coast to Land's End. If you fancy some challenging bend action, keep an eye open for the B3306 from St Ives to Land's End.

This narrow, sometimes lumpy road offers lots of technical turns and peg scraping bends. Take a laid back, rather than flat out, ride and you'll also get to enjoy the stunning coastal scenery.

The best thing about Cornwall is the spider web of B roads that branch off the main routes towards hidden gems along the coast. Watch out for places like Tintagel, St Ives, and Mousehole. While you're there, go native and try a bacon and egg Cornish pasty too.

Many miles clocked up, scratching along A roads that wind curvaceously through mountains and valleys, comes to mind when thinking of riding through Wales. The only downside is that with so many fabulous roads, it's hard to choose only one.

For Mid Wales, head north through the Brecon Beacons, past the Victorian Spa towns of Builth and Llandrindod Wells. This route winds and sweeps through scenic mountain passes and rolling forested hills.

The roads are in good condition but resist the temptation to thrash your ride as sunny days bring out the Heddlu (police).

Way out west, you can enjoy the magnificent coastline unfolding before you. Start from Tenby and head west through the Pembrokeshire Coast National Park to the clear blue waters of Cardigan Bay.

If you've got time, look for a single track road on the left as you leave St Davids on the A487. This narrow road meanders through tiny hamlets, including St Nons, before taking you back on the A487 by Square and Compass.

The A2 heading north out of Belfast has long been the go to bike route in Northern Ireland. It's not hard to see why. Past Larne, the A2 is one of the all time, greatest twisty coast roads. The road hugs the cliff edge and flipping from bend to bend makes you glad to be a biker.

After the Giant's Causeway, continue to follow the road west to Londonderry. Don't be surprised if you recognise its stunning sandy bays or windswept headlands. Game of Thrones filmed extensively here. The craggy landscape doubled for everything from Daenerys Targaryen's Dragonstone (Downhill Strand) to the Port of Braavos (Carnlough).

For me, a great biking road is so much more than a well kept blacktop. Being able to stop and enjoy interesting points of interest along the way significantly increases enjoyment. Motorcycle friendly roads, history around every bend and the occasional reviving Irish stout, what more could you want?!

The Scottish highlands are a wilderness on our doorstep. Huge chunks are unspoiled and its iconic and uncompromising scenery makes it a joy to ride through. What's more, the well kept roads and the North Coast 500, is a great way to sample a taste of motorcycling in the Highlands at its best.

The 516 mile loop begins and ends at Inverness Castle and will lead you deep into the Northern Highlands, taking you as far as John o' Groats. Even at the height of summer, weatherwise, you can expect the unexpected.

Look out for the mega bendy Bealach na Bà single track pass that climbs 2000 feet through the Applecross Mountains (worth the journey alone). Beware of jaywalking and Highland cattle, plan your fuel stops and you'll experience the ride of a lifetime.

Riding a motorcycle through the Scottish Highlands can, at times, be raw and challenging. It is, however, one of those rides that will make you feel like you've achieved something remarkable.

Whether it's a day long blast or a full on road trip, the best UK Motorcycle Riding Routes will leave you with serious grins to the gallon.