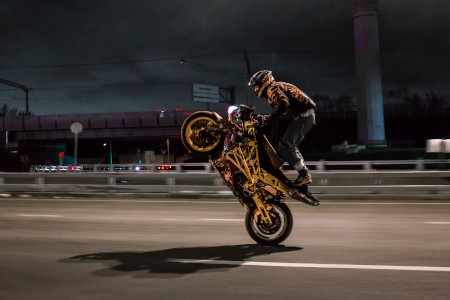 In 1903 Glen Curtiss created the first motorcycle world record. Not content with his achievement some four years later, the fearless American built a V8 aircraft engine and shoehorned it into a bicycle frame.

Curtiss's motorcycle clocked up a jaw–dropping 136.27–mph. This speed made him the fastest man on the planet, beating cars, trains, and even airplanes.

Breaking world records on a motorcycle is dangerous and exciting. Most of all, though, it's addictive, and more than 100 years after Glen Curtiss's groundbreaking efforts, there's still no shortage of daredevils taking up the challenge.

Standing on your motorcycle seat may be great for seeing over the top of traffic, but it's not recommended. That is, unless, of course, your name is Ratnesh Pandey. In 2015 Pandey managed to stand upright on his Honda CB150 for an incredible 20–miles.

His stunt is even more remarkable when you consider he achieved it on India's chaotic roads.

This right to hold this record has long been a battle between British stunt rider Gary Rothwell and Swedish stunt rider Patrick (Ghost Rider) Furstenhoff.

Unfortunately for both men, August 2016 saw Dutch rider Egbert van Popta blowing them both into the weeds at the colossal speed of 213.39–mph. The Flying Dutchman beat a field of 30 competitors from Europe and the USA to take the record on his turbocharged Suzuki Hayabusa.

The young men bolted a flushable cistern to a go–cart frame and used a toilet brush for a gear stick.

With Ellis in the hot seat, the motorised toilet blew away the competition reaching a top speed of 70.54–mph on September 15th, 2018.

Robbie' Maddo' Maddison is a former freestyle Australian motocross champion. Robbie retired from the track to take up the sedate pastime of record–breaking.

Motorcycles and water aren't often a winning combination, but this didn't deter 'Maddo' when he fitted the tyres of his KTM with skis and paddles.

The Ozzie motocross champ rode his bike through the pipeline of Teahupo'o, one of Tahiti's trickiest surfing waves. He continued along the coast for 19.75 miles, breaking the world record distance for riding on water.

Maddison's incredible wave ride also saw him also break the record for the fastest motorcycle on water. In 2019 however, Italian rider Luca Colombo pushed him off the top slot. Riding across Italy's Lake Como, Colombo reached a top speed of 64.6–mph to become the fastest bike rider across water.

Before he even made it onto the track, though, disaster struck. Safety marshals deemed his crash helmet unsafe, leaving Marco to catch a lift into the nearest town to buy a new one. He made it back in time to get in a mere two practice runs balancing on his new helmet before going for the record.

Breaking the record on his first run, one of the organisers said he'd made balancing upside down on a fast–moving bike look too easy. Marco responded by heading straight back to the track.

His fastest speed of 76.17–mph set a new headstand world record. "It takes a lot of core strength to stand on your head at that speed, but I won't be trying it again, I promised my mum, " admitted the record–breaker.

Not known for their aerodynamics or stability, pushing a wheelie bin to 43.3–mph is a colossal effort. Design engineer Andy Jenkins, from Swindon, England, fitted his wheelie bin with a single–cylinder 4–stroke Honda engine and headed for the track.

On September 27th, 2020, Jenkins battled side winds that almost blew the bin over, creating a new land speed world record, winning him a place in the Guinness Book of Records.

When Harley–Davidson jumps on the electric motorcycle bandwagon, you know EVs are here to stay.

Ewan McGregor and Charley Boorman may have created a new world record for the longest journey on an electric motorcycle (13,000 miles), but they wouldn't stand a chance when it comes to speed.

As long as there are motorcycle records, there will be no shortage of the brave, bold and bonkers, willing to push the envelope. Motorcycle record breakers of the world, we salute you.